Gerome at the Getty

The Gerome exhibit at the Getty was super-fantastic!!!!!! I love all the Orientalist (Exoticist) Painting - he set up paintings like a cinematographer and his mastery of paint is some of the best I've ever seen.He seems to know how to make everything seem so easy - like the wrinkles in a rug on the floor - so realist and yet it appears so effortlessly done. If you are in LA you have to go to this exhibit. 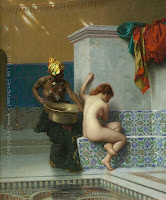 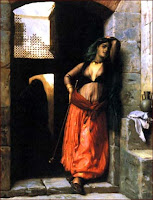 Getty website description:
"Jean-Léon Gérôme (1824–1904) was among the most officially honored and financially successful French artists of the second half of the 19th century. His brilliantly painted and often provocative pictures were at the center of heated debates over the present and future of the great French painting tradition. Reproduced using brand new photomechanical processes and dispersed across Europe and America, Gérôme's images indelibly marked the popular imagination, directly influencing spectacular forms of mass entertainment, from theater to film.Through most of the 20th century, however, Gérôme's critical reputation was tarnished by his alleged commercialism and his stubborn opposition to the triumphant avant-garde movements of Impressionism and Postimpressionism. The first comprehensive exhibition of his work in almost 40 years, this exhibition offers the opportunity to reconsider the variety and complexity of Gérôme's masterful oeuvre.The exhibition brings together works that span Gérôme's entire career, from his early "Néo-Grec" paintings with their lighthearted take on classical antiquity, to his wide variety of historical scenes that still impress with their dramatic realism. A core group of Gérôme's Orientalist genre paintings are also on view. These paintings were inspired by the people and architecture he saw on his many voyages, beginning in the late 1850s, to Egypt, the Holy Land, and Asia Minor. Late in life, Gérôme shifted his focus to sculpture, conducting innovative experiments with polychromy that were informed by the latest archeological knowledge of antique sculpture. Although derided by critics, Gérôme's colorful, ornate statues—key examples of which are included in the exhibition—were popular among collectors, for whom he had them reproduced in a variety of sizes and materials."

Posted by Nya Patrinos at 9:39 AM No comments:

I built thi s interior in Sketch Up now I'm going to hand draw and fix it up a bit and detail it out using my light table and tracing paper. I'm sick of photoshop - I don't know how to use it. I want to see what I can come up with using Piranesi as an influence. It will end up being the Palace that my character Gaspar stays at when he gets to Sarbug in the Hymn of the Pearl

Posted by Nya Patrinos at 8:37 PM No comments:

From Life Drawing to Cartooning

I'm taking a class at LAAFA called from Life Drawing to cartooning we do a lot of copies from cartoons and Loomis to figure out how to make cartoons. The teacher is Rad Seachrist. He's good. He does demos and walks around the room and sees what everyone is doing. He has a lot of good handouts.

Rad did a demo for me about turning the head. 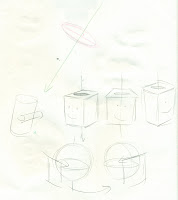 These are some copies I did.

These are more copies. 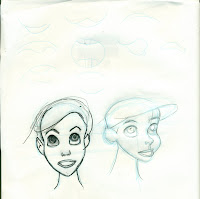 These are copies from Loomis.

These are some of my notes from Rad's demo on arms this week.

These are some copies I did and tried to take the approach in designing my own character Kama from my story Hymn of the Pearl.

Here are some more designs I worked on for Kama based on some characters Rad gave us.

A demo from Rad about how to make my character more believable.

Me starting a turnaround for my character Kama. 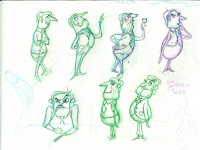 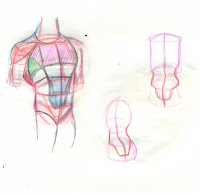 Me working on Kama based on Disney character from El Dorado. 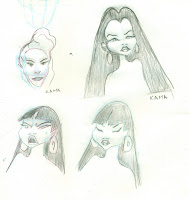 Me trying to break a turnaround into basic shapes.

Posted by Nya Patrinos at 9:03 PM No comments: