Charts for Pawanmuktasana 1,2 and 3 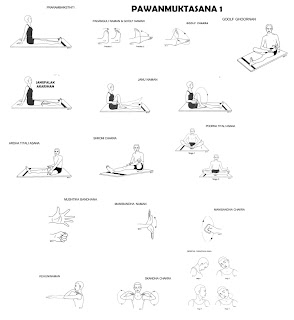 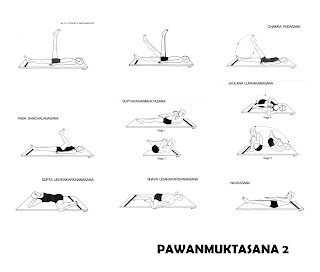 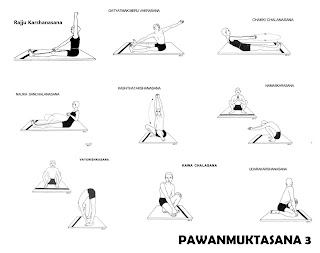 Posted by Nya Patrinos at 9:52 PM No comments:

Deepening the Awareness of the Asanas - Twists 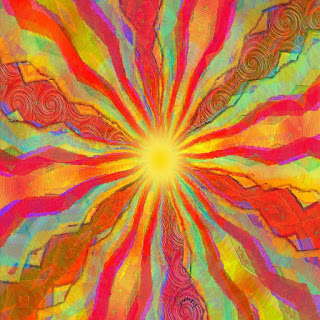 The Self is the sun shining in the sky.
The wind blowing in space; he is the fire
At the altar and in the home the guest;
He dwells in human beings, in gods, in truth,

Posted by Nya Patrinos at 6:15 PM No comments: 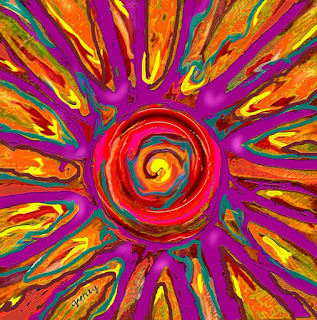 As the sun, who is the eye of the world,
Cannot be tainted by the defects in our eyes
Nor by the objects it looks on,
So the one Self, dwelling in all, cannot
Be tainted by the evils of the world
For this Self transcends all!
Posted by Nya Patrinos at 6:10 PM No comments:

Readings from the Brihad Aranyaka Upanishad
translated by Patrick Olivelle

The Sanskrit phrase ayam atma brahma succinctly expresses this notion of the unity of the self with the absolute principle and is frequently cited by Hindu theologians who adhere to the Advaita Vada. Because the atman is embodied it becomes identified with the senses, mind and intellect that is currently employs. So now we conceive of ourselves in terms of the mental faculties we employ day by day, moment by moment. When anger penetrates the consciousness, we say, “I am angry” because the atman has become identified with the intellect that undergoes the transformation into a state of anger.
Posted by Nya Patrinos at 9:30 AM No comments:

What is then that dictates the actions we perform? Why does one person pursue the path of virtue and another the path of perdition? The answer given here is the same as that given by Krishna in the Bhagavad Gita (3.37): it is kama, or desire. For Krishna it is selfish desire that is the root of sin and the cause of anger, but the Brihad Aranyaka Upanishad explains the matter in a slightly different
way. It notes that desire shapes resolve (kratuh) and one’s resolve determines the actions one
performs. The point here is really quite simple, though it is fundamental to our understanding
of the doctrine of karma and of good and evil. If one’s desire (kama) is to be righteous, then
one first resolves to follow a virtuous life and then undertakes the virtuous actions (punya)
that lead to a pleasant future destiny. But if one’s desire is simply to enjoy pleasure through
the senses, then one’s resolve follows this desire and one is impelled to perform the wicked
acts that are required for unrestricted sensual pleasures. So for the Upanishad here, kama or
desire is not to be condemned universally. Rather it is the direction of one’s desires that is the
key point in determining the nature of one’s actions and the future destiny shaped by these
actions.
Posted by Nya Patrinos at 9:23 AM No comments:

In the beginning this world was only brahman and it knew only itself, thinking, ‘I am
brahman.’ As a result, it became the Whole. Among the gods, likewise, whosoever realized
this, only they became the Whole. It was the same also among the seers and among the
humans. Upon seeing this very point the seer Vamadeva proclaimed: ‘I was Manu, and I
was the sun.’ This is true even now. If a man knows, ‘I am brahman’ in this way, he becomes
this whole world. Not even the gods are able to prevent it, for he becomes their very self
(atman). So when a man venerates another deity, thinking, ‘He is one, and I am another’, he
does not understand. As livestock is for men, so is he for the gods. As having a lot of livestock
is useful to a man, so each man proves useful to the gods. The loss of even a single head of
livestock is painful; how much more so if many are lost. The gods, therefore, are not pleased
at the prospect of men coming to understand this. (1.4.10)

This passage opens with another of the famous statements (Mahavakyas) of the Upanishads—
aham brahmasmi, or ‘I am brahman’—and in effect everything else here centres on that
realisation. From the outset the link is established between knowing and becoming. Brahman
is brahman because it knows itself to be brahman, which is further defined as ‘that which is
all things.’ From the next sentence we learn that the same principle applies to gods, great
seers (rishis) and men. If they gain the knowledge implicit in the words aham brahmasmi then
they too will become brahman. It was on the basis of such realisation that the rishi named
Vamadeva came to perceive his identity with Manu and with the sun.

In these lines we have a clear expression of the Upanishadic notion of Advaita and also the
power of true knowledge in creating identity. Any man, god or rishi can attain identity with
brahman, identity with that which is all things, by realised knowledge of that identity. In other
words, one becomes brahman as soon as one knows oneself to be brahman. And in fact one
already is brahman for brahman is all things; but as long as one does not attain this realisation
one lives out an existence as if one were not brahman. Hence we can see here several of
the key principles that lie at the heart of Shankaracharya’s teaching. One’s true identity is
brahman, one’s existence as something other than brahman is an illusion and when one gains
the realisation aham brahmasmi, then the illusory existence ceases, moksha is gained and one
becomes what one truly is, brahman alone. Hence Vamadeva exclaims ‘I am Manu and I am the
sun, because brahman is all things. I am brahman, Manu is brahman and the sun is brahman’.