“Pratyahara itself is termed as yoga, as it is the most important limb in yoga sadhana.” - Swami Sivananda

"Just as a tortoise withdraws its limbs, so when a man withdraws his senses from the sense objects, his wisdom becomes steady." -Bhagavad Gita 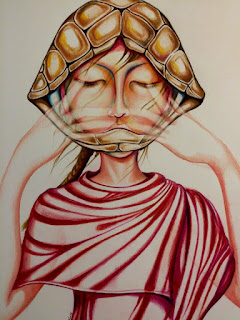 Pratyahara
The term “pratyahara” is composed of two Sanskrit words, prati and ahara. “Ahara” means “anything we take into ourselves from the outside” and “Prati” means “against” or “away.” “Pratyahara” translates to “gaining mastery over external influences.” When pratyahara is compared to a turtle withdrawing into its shell—the turtle’s shell is the mind and the turtle’s limbs are the senses.

Internalizing with Ujjayi Breathing focusing on the inhalation and the exhalation.

Shanmukhi mudra is a yogic hand gesture that represents closing the six gates of perception – the eyes, ears, nose and mouth.

Yoga Nidra, a systematic 4 to 8 stage guided relaxation technique promoting a state of consciousness between waking and sleeping.

Posted by Nya Patrinos at 12:38 PM No comments:

4 Ways Yoga Can Support Other Therapies 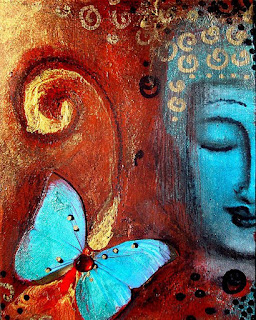 1. Yoga assists in the creation of the therapeutic bond, the safe and sacred space where therapy will take place. (Yoga offers rituals and practices including the lighting of a candle, the use mudras, breath techniques called a pranayama, imagery of sanctuary or of peace called a bhavana, soothing universal tones called a mantra, or cleansing breathing techniques called a kriya).

2. Yoga provides a slow invitation to move back into a felt sense of living in the body. (This begins with the subtle cueing the teacher or therapist offers to her client, allowing him to acknowledge sensation in his face, for example, or his hands after guiding a practice, without ever saying, “It’s safe to feel your body,” a concept your client’s mind may immediately resist).

3. Yoga begins to still and focus the mind for the work of therapy.

4. Yoga has a tradition of holding poses, sometimes until the body begins to tremble. (The ancient yogis believed vigorously shaking released tension and intrinsic memory stored in the body-mind).
Adapted from Amy Weintraub - Yoga Skills for Therapists
Posted by Nya Patrinos at 9:52 AM No comments:

The Egyptian Yoga called Sma or Sema like Indian Yoga is concerned with union.  The union of the dualistic Higher Self  with the dualistic Lower self, leads to Non-duality, the One, singular consciousness. 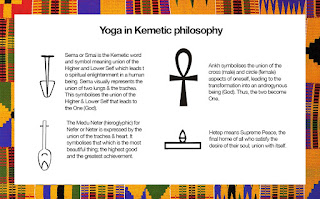 The Higher Self can be:
- The Upper Kingdom
- The Higher Chakras
- The Lotus
- Heru

Posted by Nya Patrinos at 7:03 PM No comments:

Is Ashe and Prana the same thing

"Oludumare/ Olorun is in all things as the ashe is the primal essence of all things. It is not the tree, the rock, the statue that African ancestors revere and worship but the deep energy that brought about its being. In maintaining the “nature religion” the ancestors were able to keep and also strengthen the very real connection between all things and human beings." 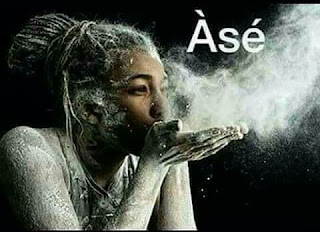 To me Ashe sounds like the same thing as Prana.

Prana is  the Sanskrit word for "life force" or "vital principle." Prana comprises all cosmic energy, permeating the Universe on all levels. Prana includes energies present in animate and inanimate objects.
Posted by Nya Patrinos at 6:58 PM No comments:


8 LIMBS OF YOGA - with help from Nischala Joy Devi

"In yoga, an asana is a posture in which a practitioner sits. In the Yoga Sutras, Patanjali defines "asana" as "to be seated in a position that is firm, but relaxed". Patanjali mentions the ability to sit for extended periods as one of the eight limbs of his system, known as ashtanga yoga.
“Asana is steadiness and comfort. Sthira-sukham asanam. In one of three terse aphorisms on the subject, the Yoga Sutras say, Sthira-sukham asanam—asana is steadiness and comfort. Steadiness and comfort describe an inner state of being as well as the experience of the physical body in an asana pose. It is a state of being “seated” in ourselves, of the body being comfortable with the mind, and the mind being comfortable with the body. In this way, the body can support the expansive state of a beautiful, clear, calm mind.” – Sandra Anderson
Posted by Nya Patrinos at 12:45 PM No comments: