1.I honor my relationships!

3.I honor my actions!

4.I honor my inspirations!

5.I honor my agility!

6.I honor my strengths!

7.I honor my divinity

8.I honor my beginnings!

9.I honor my ancestors!

10.I honor my creativity!

11.I honor my achievements!

12.I honor my path to enlightenment!

Here is the form of Surya Namaskar I use 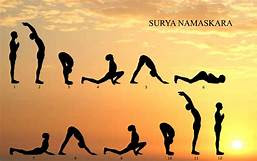 Here are the explanations of the Sun Gods energies that are chanted to during Surya Namaskar.

Mitra is the embodiment the attitude of reverence to the source of all life. The sun is our universal friend, endlessly giving light, heat and energy. In the scriptures, Mitra is described as calling man to activity, sustaining earth and sky and beholding all creatures without discrimination, just as the early morning sun signals the beginning of the day’s activities and sheds its light on all life.

Ravi's name means one who shines and offers divine blessings upon all life. In the second position, hasta utthanasana, we are stretching our whole being upwards towards the source of light to receive these blessings.

The oldest surviving Vedic hymns, such as the hymn 1.115 of the Rigveda, mention Sūrya with particular reverence for the "rising sun” and its symbolism as dispeller of darkness, one who empowers knowledge, the good and all life. However, the usage is context specific. In some hymns, the word Surya simply means sun as an inanimate object, a stone or a gem in the sky (Rigvedic hymns 5.47, 6.51 and 7.63); while in others it refers to a personified deity.

Bhanu is the sun physically represented by the guru or teacher who removes the darkness of our delusions, just as the darkness of the night is removed with every dawn. In the fourth position, ashwa sanchalanasana, we turn our face towards this illumination and pray for an end to the dark night of ignorance.

It is the embodiment sun’s daily movement through the sky which is the basis of our measurement of time, from the earliest use of a sun dial to the sophisticated devices used today. In parvatasana, we offer obeisances to the one by whom time is measured and pray for progress in life.

The embodiment of the sun as the source of all strength. Like the father, he nourishes us with energy, light and life. We offer respects in ashtanga namaskara by touching all the eight corners of our body to the ground. In essence we are offering our whole being in the hope that he may bestow mental, physical and spiritual strength and nourishment upon us.

Hiranya garbha is also known as the golden egg, resplendent as the sun, in which Brahma was born as the manifestation of Self-existence. Hiranya garbha is the seed of causality, thus the whole universe is contained within Hiranya garbha in the potential state prior to manifestation. In the same way, all life is potential in the sun, which represents the great cosmic principle. We offer respects to the sun in bhujangasana, the seventh position, praying for the awakening of creativity.

Maricha is one of Brahma’s sons, just as the rays of light are produced from the sun, but his name also means mirage. For our whole life we seek after a true meaning or purpose, like the thirsty person who seeks water in a desert but is fooled by mirages dancing on the horizon, produced by the sun’s rays. In the eighth position, parvatasana, we pray for true illumination and discrimination in order to be able to distinguish between the real and the unreal.

9. Aditi and the Adityas

Aditi is one of the many names given to the cosmic Mother, Mahashakti.The adityas are her sons. She is the mother of all the gods, boundless and inexhaustible, the creative power from which all divisions of power proceed. The sun is one of her children or manifestations. In the ninth position, ashwa sanchalanasana, we salute Aditi, the infinite cosmic mother.

Savitr is known as the stimulator, the arouser, and is often associated with Surya who also represents the same posture, padahastasana. Savitr is said to represent the sun before rising, stimulating and arousing man into waking activity, and Surya is said to represent the sun after sunrise, when activity begins. Therefore, in the tenth position, padahastasana, we salute Savitre to obtain the vivifying power of the sun.

Arka means ‘energy’. The sun is the source of most of the energy in the world we know. In the eleventh position, hasta utthanasana, we are offering respects to this source of life and energy

In this final salutation we offer respects to the sun as a symbol of the great revealer of all transcendental and spiritual truth. He lights up the pathway leading to our ultimate goal of liberation. In the twelfth position, pranamasana, we pray that this pathway may be revealed to us.

My go to resource on Sun Salutations is Swami Satyananda's Book

Surya Chandra Mantras
Shiva Rea has the Sun Salutation Mantras in her DVD
Sun Salutations
I examine the Sun Moon Archetypes in my eCourse Archetypal Yoga Therapy
Posted by Nya Patrinos at 11:53 AM

Thank you for your comment. It is much appreciated.